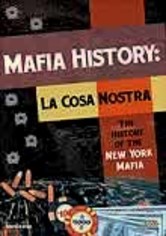 2004 NR 0h 48m DVD
This absorbing documentary charts the history of one of the most fascinating subcultures in America: the New York mob. Discover how the crime syndicate pulled its roots from Italy, planted them right in the heart of the Big Apple and flourished during the not-so-dry run of the Prohibition. Although in-fighting and scrutiny from the government have squeezed out the Mafia's power and glamour, it still maintains its place in urban history.