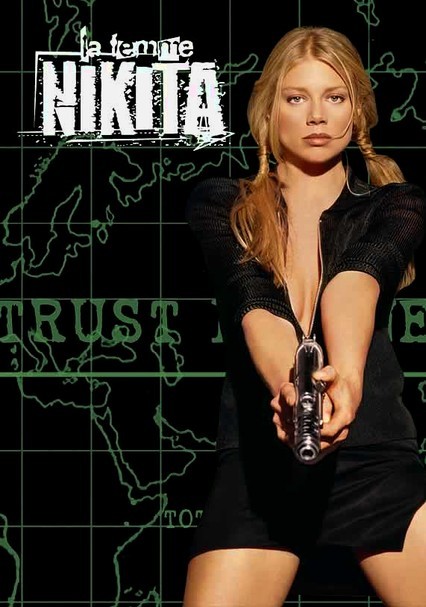 1997 NR 5 seasons
Luc Besson's 1990 hit film inspired this action-packed series about the gorgeous and lethal Nikita (Peta Wilson), who is falsely accused of murder and turned into a top spy by a clandestine organization that sends her on elaborate missions to capture terrorists. While struggling to regain her freedom, Nikita travels the world to apprehend the targets of her bosses at Section One, whom she suspects have a malicious agenda that jeopardizes all.

Based on Luc Besson's cult hit of the same name, this frenetic series stars Peta Wilson as a street-smart femme fatale caught up in a government web of deceit and double-cross. Accused of a crime she didn't commit, she's trained as an operative.

In this USA Network series based on the big-screen hit, Peta Wilson stars as Nikita, the mysterious secret agent christened "Josephine" by Section One, an undercover organization that recruited her and is trying to mold her into a ruthless follower. Nikita struggles to wrest control of her identity even as Section One fights to protect its mission. Extras include commentaries, scenes introduced by director John Cassar, a gag reel and more.

The third season of the USA Network series finds reluctant government operative Nikita (Peta Wilson) attempting to locate her paramour and partner, Michael Samuelle (Roy Dupuis). Meanwhile, suspicion begins to grow about the real nature of the soulless Section One. And little does Nikita know that her boss (Eugene Robert Glazer) at the secret antiterrorist organization is conspiring to terminate her, believing she's outlived her worth.

Based on the 1990 movie of the same name, this TV drama follows the exploits of a secret agent who was sentenced to life in prison before being used as an instrument of the law. In Season 4, Nikita (Peta Wilson) continues to show signs of her reprogramming by doing things she's never done before. Meanwhile, Michael (Roy Dupuis) is determined to reverse the process but runs into problems when the higher-ups don't support him.

In the final season of the cult hit television drama, beautiful and deadly Nikita (Peta Wilson) -- a reluctant secret agent for a clandestine government organization -- uncovers the mole inside Section One, as well as some vital clues about her past. Most important, Nikita finally learns the true reason she was forced to enlist as an assassin in return for freedom from prison -- where she was incarcerated for a crime she didn't commit.