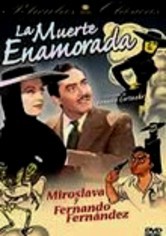 1951 NR 1h 27m DVD
A man's life changes forever when death -- in the form of a female grim reaper -- moves in with him and his family, all so that he can buy a bit more time on earth. The only catch is, his family has no idea that their houseguest, a woman their father says is a foreign relative, is there to take their daddy away. Miroslava Stern, Fernando Fernandez and Jorge Reyes star in this inventive Spanish-language comedy.