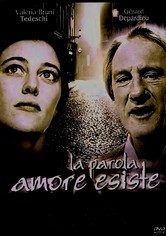 1998 NR 1h 24m DVD
Angela (Valeria Bruni Tedeschi), an emotionally fragile woman in her thirties, has no problems talking to her therapist (director Mimmo Calopresti), yet she can't seem to communicate with her wealthy mother (Daria Nicolodi). A chance meeting with a divorced father (Fabrizio Bentivoglio) and his teenage daughter (Emanuela Macchniz) begins to draw Angela out of her shell -- until her intense emotions land her in the psychiatric ward.