La Traviata: Love & Sacrifice: The Story of the Opera 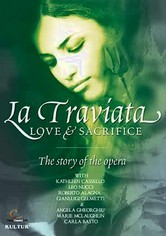 La Traviata: Love & Sacrifice: The Story of the Opera

2008 NR 1h 0m DVD
An in-depth look at Giuseppe Verdi's masterpiece "La Traviata," this documentary traces the opera's storyline, examines the ways it's been staged in theatrical productions throughout the years and analyzes many of Verdi's carefully crafted choices. Talented singers such as Kathleen Cassello, Angela Gheorghiu, Marie McLaughlin and Carla Basto are all featured performing the leading role of Violetta in this program.