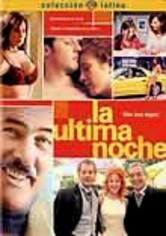 2005 NR 1h 59m DVD
This Mexican comedy -- whose title translates into "The Last Night" -- is the final installment in a three-part series (with The First Night and The Second Night rounding out the trilogy). With the ultimate goal of dispelling myths about sex in Latin culture, the film tells the stories of 50-something Gloria (Cecilia Gabriela), a young married couple (Mariana Ávila and Ricardo Palacio) and the single-and-searching Elena (Elizabeth Valdez).