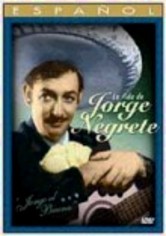 1998 NR 1h 0m DVD
Rising from humble beginnings in Guanajuato, Mexico, Jorge Negrete went on to study opera and subsequently became the greatest &NFiranchera&NFi_; singer in the history of Mexican cinema, appearing in more than 40 films. This Spanish-language documentary examines his fascinating life and career, including his high-profile marriages to actresses Elisa Christy and "La Doña" Maria Felix, one of Mexico's most enduring leading ladies.