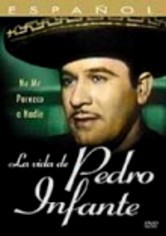 2004 NR 1h 55m DVD
Although he recorded more than 350 waltzes, cha-chas and &NFicanciones rancheras&NFi_; and appeared in more than 60 films in the 1940s and '50s, singer-actor Pedro Infante is largely unknown outside of Latin America and his native Mexico. This Spanish-language documentary chronicles Infante's rise to fame, his brief but prolific career, and his obsession with flying airplanes, a passion that ultimately led to his early death at the age of 39.