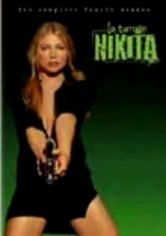 2000 NR 6 discs
Based on the 1990 movie of the same name, this TV drama follows the exploits of a secret agent who was sentenced to life in prison before being used as an instrument of the law. In Season 4, Nikita (Peta Wilson) continues to show signs of her reprogramming by doing things she's never done before. Meanwhile, Michael (Roy Dupuis) is determined to reverse the process but runs into problems when the higher-ups don't support him.