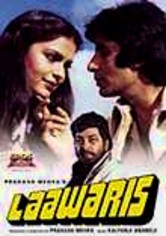 1981 NR 3h 0m DVD
Vidya (Rakhee Gulzar) and Ranvir (Amzad Khan) fall in love, and Vidya is soon with child. She carries the baby to term without Ranvir's support, only to die after giving birth. The child, Laawaris (Amitabh Bachchan), grows into an adult and wonders about his heritage. Later, he crosses paths with his father, Ranvir, and forms a bond with him, though neither knows the other's identity. As time passes, will Ranvir admit that Laawaris is his son?