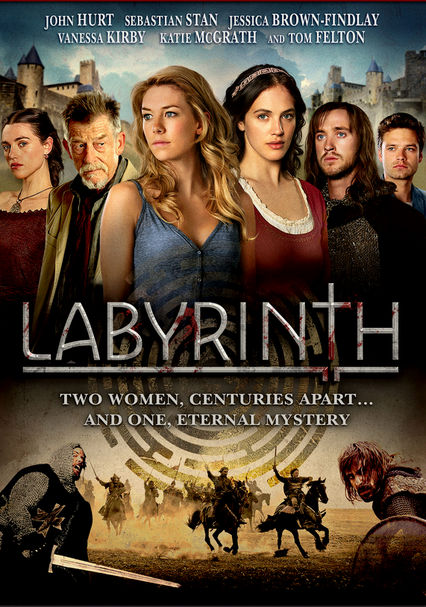 2012 NR 2h 56m DVD
Based on the best-selling series of novels by Kate Mosse comes Labyrinth, a four-hour mini-series now available on DVD. Lives are linked by destiny to solve the world's most legendary mystery.

Parents need to know that Labyrinth is partially set in France during the Crusades, and the re-enactment of a particularly gruesome massacre takes center stage during much of the story. People are hung, stabbed, strangled, and burned alive among other violent acts, and the images will be upsetting to sensitive viewers. The story is rooted in grail lore and the concept of the supernatural, and the Catholic Church -- through the extension of the Crusaders and a power-hungry modern-day character -- is cast in a very negative light as opposed to their more sympathetic victims. One bedroom scene shows a woman partially nude (her bare back and the sides of her breasts are visible) during sex, plus there are other instances of physical closeness and some occasional salty language in this captivating drama miniseries.

In one steamy bedroom scene, a woman is topless but shown mostly from the side and back as she and her partner have sex. There are a few occasions for kissing and fondling, and in another case, a woman walks around in her bra.

Graphic scenes of war and death with few details spared. People are stabbed, shot by arrows, and hung from tree branches. A man slits another's throat; another breaks a foe's neck. Battlefield scenes show bodies battered, maimed, and dismembered. A main character is strangled, though his killer is more visible than he is. Victims are cut, burned, and beaten for information. A man dies a slow death from poisoning. In one wrenching scene, an entire community of people jump into a fiery pit to their deaths.

The story is loosely based on historical events in Southern France in the early 13th century during a violent clash between Crusaders and the Cathar people. Some characters succumb to the lust for power, while others sacrifice everything to protect a secret that's bigger than they are. The modern-day storyline has its own set of antagonists who are no less cunning and vicious, plus some who value truth and honor instead. It paints a dismal picture of the medieval Catholic church and its pope, who authorized the Crusaders' violent acts against those it deemed heretics, but it's not an inaccurate one, given knowledge of the history.

The miniseries is based on a book of the same name by Kate Mosse.

Some alcohol consumption among adults, but it's not a major plot point.