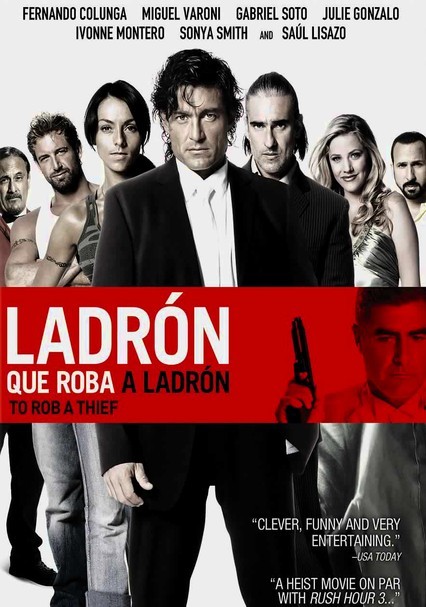 Parents need to know that while this subtitled caper film is warm-hearted and doles out plenty of lessons -- for starters, don't prey on the disenfranchised and don't forget your roots -- it's still about a gang of thieves stealing from someone (even if he is a despicable lowlife). In a Robin Hood way, the movie (like the Ocean's series) glamorizes what's essentially a criminal undertaking, and tweens may not grasp the nuances. In addition to the somewhat salty language (including one "f--k" and the other usual suspects), there are some fairly brutal scenes, especially toward the end, when a man is violently beaten. Characters also make ends meet by stealing (pirating videos and helping themselves to other people's pocket change).

A couple wakes in bed; later, they kiss passionately. Another couple gropes each other in a bathroom.

Not particularly frequent, but fairly brutal when it happens. In one long scene, Valdez's henchmen beat a man to a pulp (he's later shown spitting up blood); guns are drawn. Early in the movie, Valdez establishes his villain status by menacing an innocent man on the set of an infomercial; he also threatens and hollers a lot. Within the first 15 minutes, there's a close-up of a gun; soon after, a man points it toward Emilio's head.

The villain is completely reprehensible, a man who preys on anyone, including the weak and the infirm, to make money. The heist -- while used as a device to send messages about standing up for the disenfranchised and remembering your roots -- is basically a plan to rip off a rich person. One character makes chauvinistic statements about women, which one female character seems to find, confusingly enough, attractive. Also, Alejandro makes a living by pirating movies.

Mercedez Benz; the movie Crash (spelled Crach); the villain makes infomercials and sells products, which are "advertised" in the movie.

Drinking and some smoking in social circumstances (a big party).