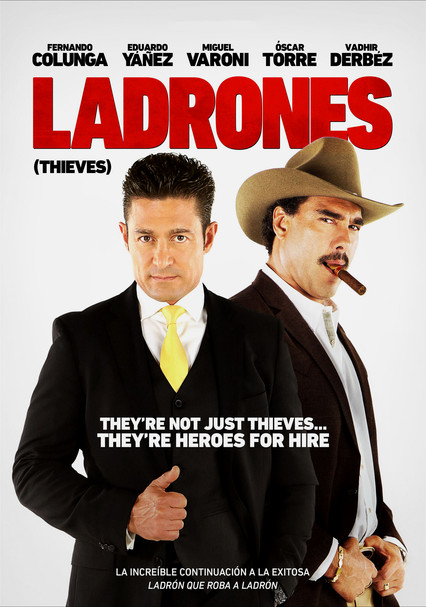 2015 PG-13 1h 37m DVD
Partners-in-crime Alejandro Toledo and Santiago Guzman come out of retirement to continue their tradition of taking down the rich to help the poor, assembling a new gang to steal back a community's land grants.

Parents need to know that Ladrones, the sequel to 2007's Ladron Que Roba a Ladron, follows the first movie's heroes, Alejandro (Fernando Colunga) and Santiago (Eduardo Yanez), as they try to retrieve land grants stolen by a greedy villain from a town of hardworking families. Alejandro is a modern-day Robin Hood, stealing from the rich and giving to the poor, while Santiago is trying to stay honest after being a career criminal. There's some violence -- a woman is grabbed, thrown to the ground, and robbed, and there's an old-fashioned shoot out, a fist fight, and a man who's shot (non fatally) -- and a few flirty scenes and swearing ("s--t" is as strong as it gets), but overally there's less iffy content here than in the first film, and it's mostly warmhearted. In Spanish with English subtitles.

Flirting and innuendo. A couple makes out. Woman chosen to be part of the heist because she's attractive. Guard watches girls in bikinis.

A robber breaks into a house, grabs a woman by the throat, pulls her hair, throws her to the ground, and then grabs her young adult daughter. Footage of shooting (like a Western); a few of the characters have guns and shoot them. One man is shot. Man burns hand with a lighter to prove he's tough and pulls his own nose with a pair of pliers. Man shot with a Taser.

People matter more than money or power. Doing what's right is more important than a big payout. A single mom talks about the importance of education and hard work.

One of the characters is on Despierta America. Chevrolet seen in a couple of scenes.