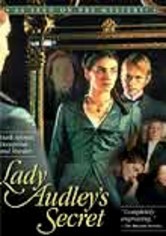 2000 NR 1h 36m DVD
When Lucy Graham (Neve McIntosh) weds the much older Sir Michael Audley (Kenneth Cranham), his nephew Robert (Steven Mackintosh) is suspicious of the lovely young woman's motives. Soon, Robert's friend disappears, and Robert believes Lucy may be involved. But as he attempts to unearth the truth about Lucy's past, he finds himself irresistibly drawn to her dangerous allure. Betsan Morris Evans's period drama is based on the novel by Mary Elizabeth Braddon's.