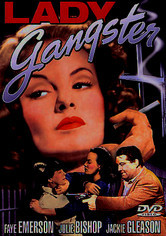 1942 NR 1h 2m DVD
After helping a gang of robbers hold up a bank, aspiring actress Dot Burton (Faye Emerson) is the only one who gets arrested. But while in police custody, she meets radio broadcaster Kenneth Phillips (Frank Wilcox), who wants to help Dot go straight. The road to redemption, however, is anything but straight in this twisty crime drama. Watch for a young Jackie Gleason in the role of a portly mob henchman.