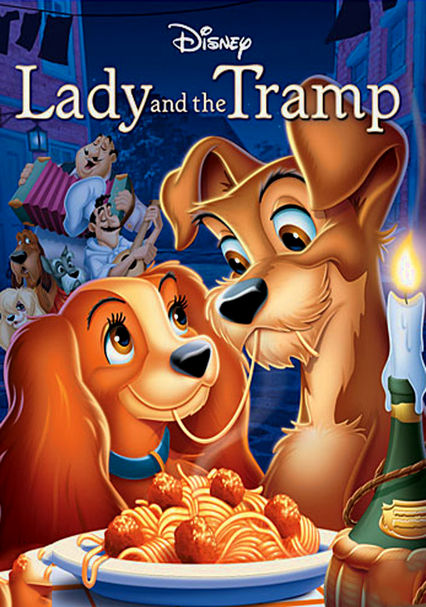 1955 G 1h 15m Blu-ray / DVD
A pampered cocker spaniel and a jaunty mutt share romance and adventure despite their night-and-day backgrounds in this animated Disney classic. When Lady's owners leave town on vacation, Tramp shows her how to live life collar-free.

Parents need to know that Lady and the Tramp is one of the milder Disney titles, with no clear villain, so it's an age-appropriate choice for younger viewers who are ready for a feature-length movie. There are a few scenes that are potentially scary, including a climactic scene where the dogs try to protect a baby who's threatened by a beady-eyed rat and an accident scene where a secondary character appears to be dead, but then later appears mildly injured. The Siamese cats are more mischievous than mean, but they can seem creepy to young kids (they also embody some dated stereotypes). Romance is a theme throughout, with the two main characters ending up together raising puppies.

Some romance between Lady and the Tramp including the famous scene where they unexpectedly kiss when slurping a spaghetti noodle. The restaurant chef helps create a romantic dinner for the dogs. References to the Tramp's previous romantic liaisons that result in some brief jealousy from Lady. Mentions of marriage between dogs. In the end, the dogs are raising puppies together.

Lady gets muzzled by a mean human. She's chased by some fierce-looking dogs. She winds up in jail (the dog pound) briefly. Lady meets two Siamese cats who are mischievous and creepy. The climactic scene involves a beady-eyed rat threatening a baby and then a frantic chase where one secondary dog character briefly appears to be dead.

Positive messages about being a good friend, protecting and helping the vulnerable, loyalty, standing up for what's right, and not judging others based on their status.

The is part of the giant Disney empire, though there are fewer merchandising options for this particular title, compared to others.