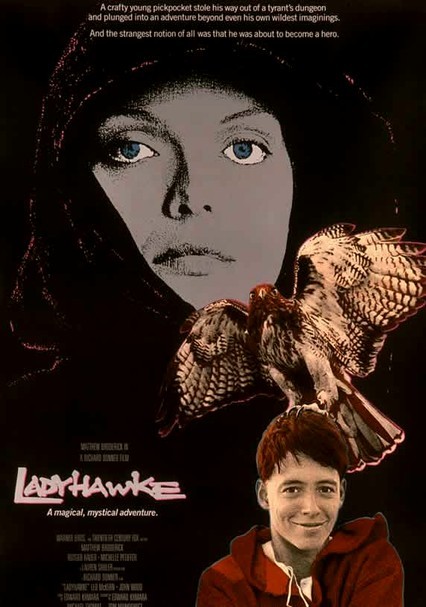 1985 PG-13 2h 4m DVD
On the run from a villainous bishop (John Wood), Philippe Gaston (Matthew Broderick), a medieval thief also known as the Mouse, befriends the gallant Captain Navarre (Rutger Hauer), who's been the bishop's target ever since he rescued Lady Isabeau (Michelle Pfeiffer). Philippe soon learns that Navarre and Isabeau are victims of a curse that will keep them apart forever -- unless he can help break the spell and reunite the lovers.

Parents need to know that Ladyhawke is a dopey 1985 romantic fantasy that will probably bore most kids and sorely try the patience of most grown-ups. Expect the slashing and impaling common to cinematic portrayals of medieval violence. Blood drips from a victim's mouth but is otherwise scarce. Several people are stabbed or pierced with arrows. One falls though ice into a wintry pond. There is a drunk priest and some mild profanity ("hell" and "damn").

A kiss. A bishop is obsessed with a beautiful woman.

Two men joust. Numerous soldiers shoot arrows at each other; several are seen wounded, although little blood is shown. Soldiers punch and kick each other. Several men are impaled on swords. One bleeds from his mouth in close-up. A man falls through ice into a frigid pond, and people dramatically try to get him out. There are close-ups of an angry wolf growling. A hawk is wounded by an arrow. Someone pulls an arrow out of a woman's chest, and she screams. A spot of blood is seen on her sheet.

No positive messages in this silly romantic fantasy.

A priest is described as a drunk.