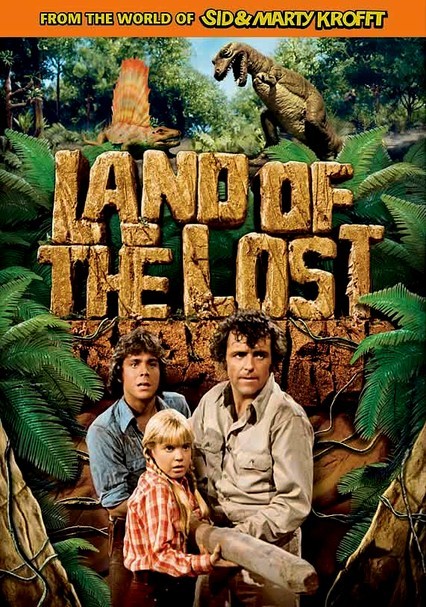 1974 TV-PG 3 seasons
Falling through a strange portal while on a rafting trip, Rick Marshall (Spencer Milligan) and his kids Will (Wesley Eure) and Holly (Kathy Coleman) find themselves menaced by towering dinosaurs and slithery Sleestak in a primitive world they can't escape. Written by some of television's top sci-fi scribes, this Saturday-morning classic offers surprisingly intriguing storylines and characters, including everyone's favorite furry Pakuni, Cha-Ka.

While enjoying a family rafting excursion down the Colorado River, the Marshall clan is suddenly transported -- through a time vortex -- to a primitive dimension populated by curious creatures ranging from reptilian to apelike. As the Marshalls look for a way to make it home, they find their survival skills put to the ultimate test. Spencer Milligan, Wesley Eure and Kathy Coleman star in this vintage sci-fi adventure series.

Still trapped in a perilous prehistoric world among an assortment of odd creatures, the resourceful Marshall family -- Rick (Spencer Milligan), Will (Wesley Eure) and Holly (Kathy Coleman) -- continues their efforts to get back to the 20th century. In the show's second season, they team with their Pakuni friends to rescue a young dinosaur, a poisonous plant puts the bite on Holly, and the dreaded Sleestak capture Rick.

In the Saturday morning fantasy series' final season, the Marshall children's uncle (Ron Harper) arrives on the scene to help youngsters Will (Wesley Eure) and Holly (Kathy Coleman) search for an escape route after their dad disappears into a time portal. While looking for the gateway that will take them home, the trio crosses paths with numerous beings from other worlds, including a buccaneer, a tubby hot-air balloonist, a medusa and a yeti.