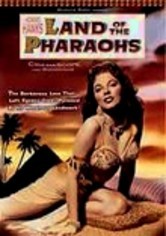 1955 NR 1h 44m DVD
Pharaoh Cheops (Jack Hawkins), obsessed with wealth and the afterlife, commissions architect Vashtar (James Robertson Justice) to build him a tomb. In exchange, Vashtar's enslaved people will be set free. Meanwhile, Cheops's wife, Princess Nellifer (Joan Collins), schemes to murder him before the construction is complete. Director Howard Hawks and co-writer William Faulkner create an epic spectacle of the building of the Great Pyramid of Giza.