Landmarks of Western Art: From Rococo to Revolution 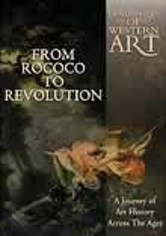 Landmarks of Western Art: From Rococo to Revolution

1999 NR 0h 50m DVD
Blending computer graphics with footage from galleries around the globe, this fascinating documentary charts the 18th century evolution of art -- which began with the development of ornamental rococo and finished with greater emphasis on pastoral motifs. A pronounced classical influence also surfaced during the period. This installment of the series features the art of, among others, Thomas Gainsborough, William Hogarth and Jean-Antoine Watteau.