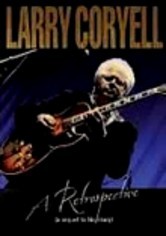 2005 NR 2 discs
Filmed at Hollywood's Avalon in 2005, this career-spanning performance features the best of jazz guitarist Larry Coryell. Interviews and backstage rehearsal footage are interwoven with the live footage as Coryell plays a dozen of his greatest tunes, including "After Later," "Souls Meeting" and "Spaces." Special guests include Maroon 5's James Valentine and David Hidalgo of Los Lobos, with Bernard Pretty Purdie on drums.