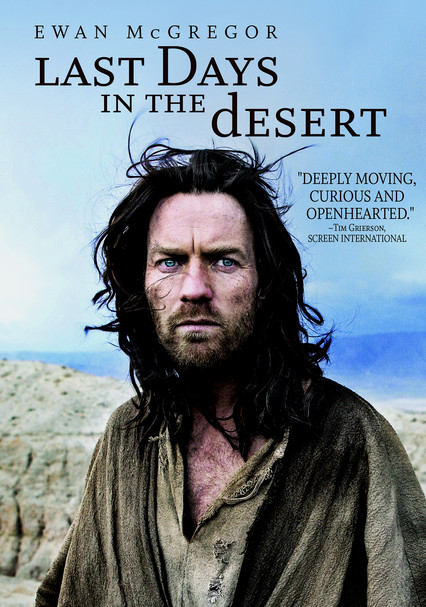 2016 PG-13 1h 38m DVD
In this intense spiritual drama inspired by the Biblical account of Jesus' 40-day desert fast, the prophet Yeshua is challenged by the Devil himself to decide the fate of a troubled family living in barren isolation.

Parents need to know that Last Days in the Desert is an atmospheric drama starring Ewan McGregor. It imagines the final stretch of Jesus' time in the desert. The film is thoughtful and at times disturbing (a man is shown dying after an accidental fall from a cliff, and viewers see Jesus' final minutes on the cross, including close-ups on the nail holes in his hands afterward), which might make it a difficult to watch for younger viewers. There's no swearing or sex, though there is a scene of a woman who's naked from the waist up; her hair covers her breasts. The film examines the importance of faith in the face of feeling unsure of your beliefs.

A character kisses a woman platonically. A woman is shown naked from the waist up, her long hair the only coverage for her breasts.

A man moves to strangle another; a character accidentally falls off a cliff and is shown bloodied and eventually dying. Jesus is shown on the cross, head bleeding from the crown of thorns, a gash on his side. Afterward, the camera zooms onto his hands, with holes where the nails were.

It's fine -- even honest -- to tussle with your beliefs and to be weakened by sadness, fear, and anger. But you must ultimately have faith and act from a place of kindness and generosity.

Wine offered during a meal.