Last Life in the Universe 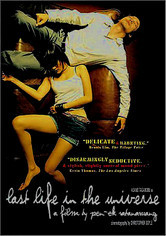 Last Life in the Universe

2003 R 1h 44m DVD
In Bangkok, a mob shooting thwarts a suicide attempt by Japanese librarian Kenji (Tadanobu Asano) and leads him to meet a woman named Noi (Sinitta Boonyasak), whose beachside shack makes the perfect hideout -- and the perfect backdrop for an unlikely romance -- in this offbeat film. He's a prim neat freak; she's a pot-smoking slob. But as their relationship grows and deepens, Noi learns more about how Kenji became suicidal.