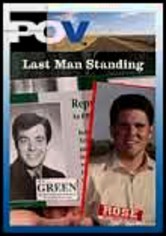 2004 NR 1h 30m DVD
What were the politics that launched George W. Bush to national office? Did they become a blueprint for Washington? Award-winning filmmaker Paul Stekler asks these questions as he takes his camera to Texas for a lively behind-the-scenes look at a pair of 2002 elections (for state representative and governor). Prominent Texans such as Bush strategist Karl Rove and former governor Ann Richards also shed light on the changing political landscape.