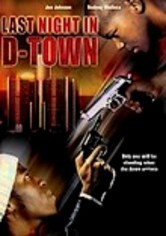 2006 NR 1h 36m DVD
Joe Johnson and Rodney Wallace star in this hard-hitting urban story about Tyrone and Jose, childhood friends who resort to pimping and hustling to survive Detroit's mean streets. But the friends turn into mortal enemies when Jose is accused of killing Tyrone's brother, whose death leads to all-out war. Fueled by revenge, Tyrone will come face to face with his former friend and Detroit's most dangerous gang. Charles E. Lee and K.I.D. also star.