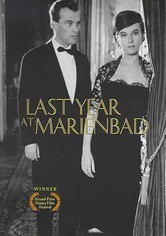 1961 NR 1h 34m Blu-ray / DVD
At a lavish European hotel, a handsome stranger tries to convince a lovely young woman that they had a passionate affair a year ago. When she claims not to remember him, he keeps trying to convince her, weaving a story that mixes memory and fantasy. Or is it all fantasy? French new wave director Alain Resnais helms this complex, controversial film that earned an Oscar nomination for Best Screenplay.