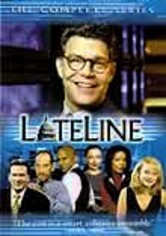 1998 NR 3 discs
In a wry spoof that pushes the boundaries (and buttons) of the juggernaut that is broadcast media, Al Franken -- who created, wrote and executive produced the show -- stars as Al Freundlich, the busy correspondent for a fictional late-news show patterned after the evening news program "Nightline." In the show-within-a-show format, real-life special guests play themselves ... often to hilarious effect.