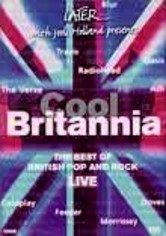 2004 NR 2h 35m DVD
This collection of live performances culled from the "Later with Jools Holland" archives celebrates 10 years of British rock, spanning 1993 to 2003. Highlights include Franz Ferdinand's "Take Me Out," Echo and the Bunnymen's "Nothing Lasts Forever," Radiohead's "The Bends," the Beta Band's "Human Being," Coldplay's "In My Place," the Darkness's "I Believe in a Thing Called Love" and Travis's "All I Wanna Do Is Rock."