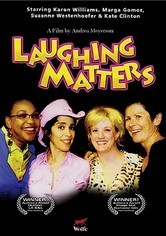 2004 NR 1h 0m DVD
Gender, politics and everyday life get skewered in this unusual documentary featuring four lesbian stand-up comics who've blazed a trail since the 1980s: Kate Clinton, Karen Williams, Marga Gomez and Suzanne Westenhoefer. Included is footage from some of their best shows, along with side-by-side interviews with each of the performers as they discuss their approach to comedy and what it's like to be openly gay in the comedy circuit.