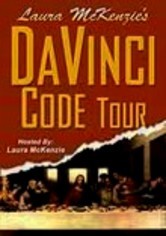 2006 NR 1h 0m DVD
Dan Brown's monumental best-selling novel, &NFiThe Da Vinci Code&NFi_;, has captured the world's imagination and has led to increased tourist traffic to various European locales referred to in the book. Join host Laura McKenzie in this documentary as she gives you a crash course in the rich history and culture of France, Italy, England and Scotland, including hot tips about great places to go for shopping bargains and memorable meals.