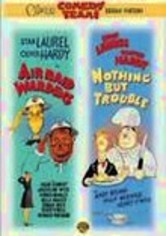 1944 NR 2h 16m DVD
If there's a job Stan Laurel and Oliver Hardy can do well, you wouldn't know it from either of these films. In one, they play an inept pair of air raid wardens who elicit a less-than-patriotic response from the town they're serving, and in the other, they play a bumbling butler and chef who try to help an exiled boy king. In both, the laughs abound as they tangle with spies, hang from ledges and more. Edgar Kennedy and David Leland co-star.