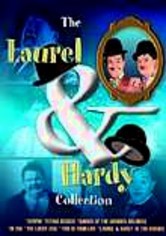 1921 NR 0h 50m DVD
Born in the 1900s, the haunting and timeless comic antics of Laurel and Hardy, one of the greatest comedy film duos in history, still make film fans laugh out loud more than 50 years after their last on-screen pairing. This video includes the 1931 short "Be Big!," in which the two buddies lie to their wives so they can go to the club; and the 1921 short "A Lucky Dog," in which they play an accused dognapper and a masked bandit who confronts him.