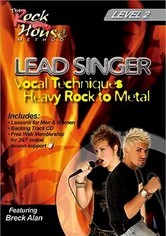 2006 NR 2h 0m DVD
Build up the vocal skills necessary to become a true rock star with this advanced-level tutorial, which features straightforward lessons on singing in your upper range, mastering placement of throat resonance, maintaining a healthy voice and more. As an accomplished singer and songwriter, host Breck Alan has performed throughout the country, composed music for television and released several CDs.