Leaders in Battle: Duke of Marlborough 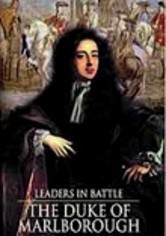 Leaders in Battle: Duke of Marlborough

2007 NR 0h 50m DVD
A 17th-century nobleman who dreamed of doing battle all his life, John Churchill grew up to realize his vision, later finding renown as a military genius. But that wasn't all he was equipped to do: This historical documentary examines his political acumen as well. It's a skill that propelled him to the center of King Charles II's court, where he rose through the ranks to become the Duke of York and, subsequently, of Marlborough.