Leaving Home: Orchestral Music in the 20th Century: Vol. 6: After the Wake 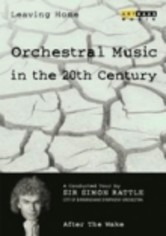 Leaving Home: Orchestral Music in the 20th Century: Vol. 6: After the Wake

1996 NR 0h 50m DVD
Liverpool-born composer Sir Simon Rattle conducts the City of Birmingham Orchestra in this retrospective look at the history of music in the 20th century, a collection of episodes taken from his "Leaving Home" television series that originally aired on the BBC. The sixth installment of a multivolume set features excerpts from Strauss's "Four Last Songs," Britten's "Serenade for Tenor, Horn and Strings" and Schoenberg's "A Survivor From Warsaw."