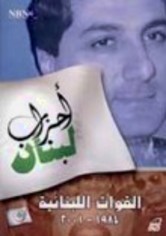 2003 NR 1h 23m DVD
Delve into the history of Lebanese politics with this documentary, which explores the rise of the Lebanese Forces, a Christian militia founded by Bashir Gemayel that opposed Syrian and Palestinian forces and later developed into a political party. Elected president of Lebanon in 1982, Bashir Gemayel was soon assassinated in an explosion, along with 25 others, nine days before he was to take office.