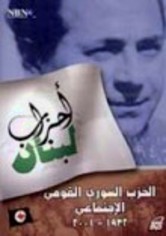 2003 NR 2h 0m DVD
This documentary profiles the Syrian Social National Party, which seeks to unify the people of greater Syria into a Greater Syrian national state. Established in Beirut in the 1930s, it has grown to include members in Syria, Jordan and Palestine. After a brief period of division in the 1980s, the SSNP reunited and gained strength over the following decade, slowly picking up deputies in the Lebanese Parliament.