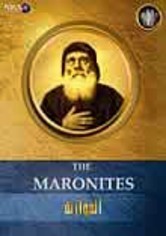 2003 NR 2 discs
This enlightening program traces the history of the Maronites, a Christian sect founded by the fifth-century saint Maron that's still thriving today -- particularly in Lebanon, where Maronites constitute a large minority of the population. Interviews and other materials reveal the substantial impact of the Maronites in the largely Muslim Middle East, including their decisive role in helping Lebanon gain its independence from France in 1943.