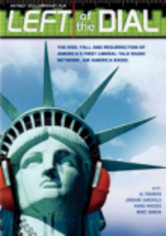 2005 NR 1h 30m DVD
Alarmed by the growing strength of conservative talk radio, a group of frustrated investors decided to launch a liberal radio station -- dubbed Air America -- in time for the 2004 presidential election. Their creation would go on to host the likes of Al Franken, Randi Rhodes and Janeane Garofalo. But before it hit the air, there were plenty of hurdles to jump, as captured by filmmakers Patrick Farrelly and Kate O'Callaghan.