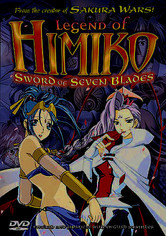 1999 NR 1h 40m DVD
In this anime series, a young girl named Himiko is called from her everyday life into a land where the dead walk among the living and good and evil are forces as real as the elements. As the series comes to a close, Himiko has finally learned to harness her powers to fight the undead army an evil king has let loose upon the land. If Himiko fails to summon the legendary Sword of Seven Blades, the forces of good will be wiped out forever!