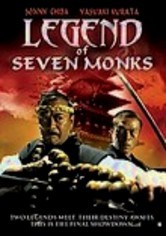 2007 NR 1h 32m DVD
Set in Classical Japan, this epic battle of good vs. evil sees martial arts film legends Sonny Chiba and Yasuaki Kurata face off against malevolent spirits who reside in an ancient mountain. After 1,400 years of battle between the forces of light and dark, only two martial monks remain at the nearby temple -- and their diminished force sets the stage for a heroic war to determine the fate of the world. Kenji Tanigaki directs.