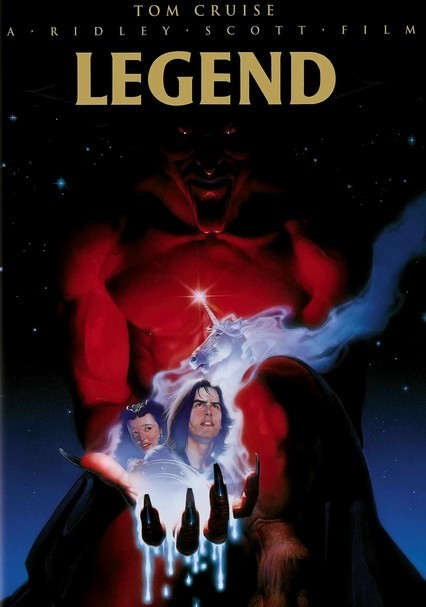 1986 NR 1h 53m Blu-ray / DVD
Jack lives peacefully in a mythical forest with animals and goblins until fate leads him to battle a host of terrors to rescue a captive unicorn. If he loses, the world plunges into an eternal ice age.

Parents need to know that Legend is a dark fantasy full of menacing and sometimes violent imagery that may terrify younger children. Actors in scary makeup and costumes play goblins representing a devil-like Lord of Darkness, who seeks to eradicate good and bring back a permanent winter of evil throughout the world. A unicorn -- the symbol of goodness -- is violently killed. Humans and sprites are attacked; one is hit in the head with an arrow. Some are carted off to be eaten. Brain-eating is mentioned, and one villain wants to drink a unicorn's blood. Expect some wine drinking. The words "s--t," "dammit," and "hell" are used. The Lord of Darkness talks of his desire for Princess Lily.

Passionate kissing. The Lord of Darkness talks of his desire for Princess Lily. Young actors playing sprites are scantily clad.

A monster loses his head, but there's no blood. A sprite is hit with an arrow to the brain but survives. A shadowy goblin hacks at a supine victim's stomach repeatedly. A huge repellant-looking goblin threatens to eat Jack. Brain-eating is mentioned, and one villain wants to drink a unicorn's blood. The pig goblin puts victims in a large cooking pot but doesn't eat them. One character prepares to cut a unicorn's head off but doesn't.

Good people must take up weapons and become similar to the evil beings they hope to vanquish.