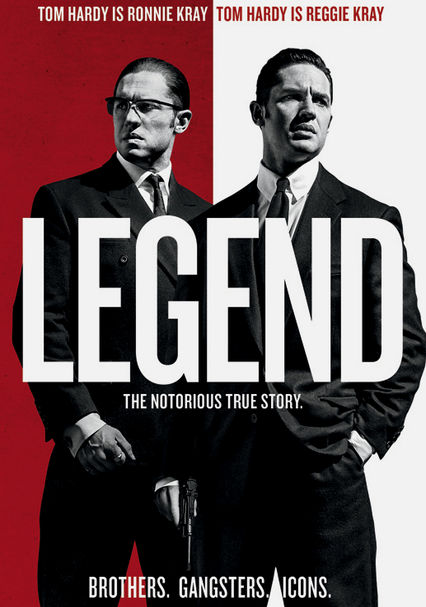 2015 R 2h 11m Blu-ray / DVD
Among the most notorious characters in Britain's gangster history, identical twins Reginald and Ronald Kray frustrated authorities while transfixing and terrifying the public with untold criminal exploits, as recounted in this riveting biopic.

Parents need to know that Legend is a crime drama based on the real-life exploits of twin brothers Ronnie and Reggie Kray (both played by Tom Hardy), who dominated the London underworld in the 1960s. One is brutal and not quite sane, the other is brutal and cunning, and the film is filled with scenes of intense, difficult-to-watch violence that leave people bloody, battered, unconscious, or dead. There's a scene of torture involving electrodes, graphic shootings and stabbings, and a man physically abuses a woman (sexual assault is implied but not shown). Aside from the violence, there's plenty of drinking, smoking, and swearing (including "s--t," "f--k," and more), as well as some drug use (one character is dependent on pills and commits suicide by overdosing). Also expect some sexual references and a few passionate kisses.

The Kray twins rule London's East End through intimidation and violence and are only too willing to dispense brutal beatings to show someone who's in charge. Many fist fights -- sometimes involving brass knuckles, hammers, and other battering implements -- that leave people on the floor, bloody and maimed or worse. A few conflicts also involve guns and knives, which result in even more bloodshed (sometimes quite gory, especially one graphic stabbing) and death. A character is hung upside down and tortured (including via electrodes). In one scene, a man beats up his wife, leaving her bruised; further assault (rape) is implied. Suicide.

Plenty of profanity, mainly "f--k," which is used liberally in almost every scene. Other words include "c--t," "bastard," "bitch," "s--t," and plenty of British slang. Some homophobic terms.

Loyalty trumps all; even when Reggie and Ronnie's unswerving dedication to each other is clearly a handicap, they refuse to sell each other out. Though it's not necessarily wise, it's admirable.

Lots of smoking (cigarettes/cigars). Many scenes take place at pubs, nightclubs, and parties and feature plenty of drinking, sometimes to excess. A character who takes prescription pills overdoses.