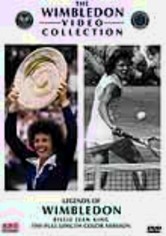 2005 NR 0h 52m DVD
With six Ladies' Singles Wimbledon wins and ten Ladies' Doubles wins, legendary tennis player Billie Jean King captured the attention of the world during the late 1960s and early '70s. King remains a powerful female role model to this day and is now a Wimbledon commentator. This program celebrates King's achievements with highlights from her championship games, insight from other professional tennis players and an interview with King herself.