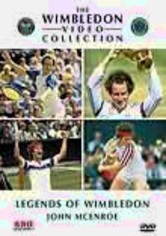 2004 NR 0h 52m DVD
Bold, brash and enormously gifted, John McEnroe is known as much for his talent on the court as he is for his tennis tantrums and bursts of anger. But beyond all that was an athlete who surpassed many legends who came before him with his exacting volleys, powerful serves and unerring returns. Get to know the legend through his forays in Wimbledon and interviews with the tournament's umpires, commentators and his doubles partner Peter Fleming.