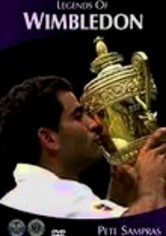 2006 NR 1h 0m DVD
Follow the ups and downs -- but mostly ups -- of one of the best players ever to swing a tennis racket at Wimbledon: Pete Sampras. This documentary tracks his career at the top British tournament, from his less-than-stellar 1989 debut to his final match there in 2002 -- and the record seven wins in between. Also featured are interviews with some of Sampras's top rivals, including Boris Becker, Andre Agassi and Goran Ivanisevic.