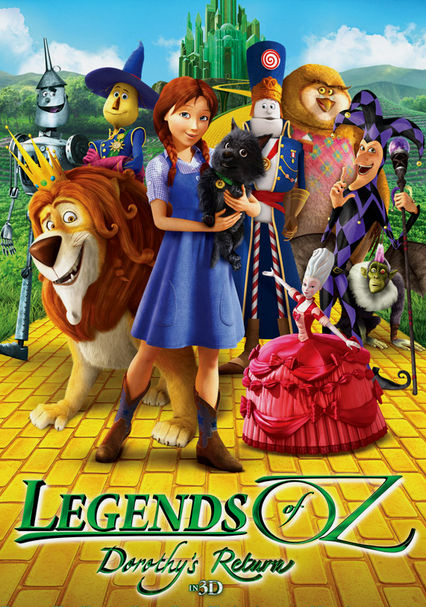 2014 PG 1h 28m Blu-ray / DVD
A bevy of stars -- including Lea Michele -- provide the voices for this animated film that returns Dorothy to Oz to help find her trio of pals. With the Tin Man, Lion and Scarecrow nowhere in sight, Dorothy faces a new villain: the wicked Jester.

Parents need to know that Legends of Oz: Dorothy's Return is a sweet, if unoriginal, 3D animated musical that boasts a cast of characters who will be familiar to fans of the original Wizard of Oz, as well as many new ones. This time around, Dorothy (voiced by Glee's Lea Michele) returns to Oz to help face a new calamity. Expect some battles that may be scary for younger kids (especially in 3D) -- the flying monkeys are, as always, menacing, as is the central villain, the Jester, who essentially tortures the Scarecrow, the Lion, and the Tin Man. Another character is gravely hurt after a skirmish, and Dorothy's Kansas home is shown as having sustained a lot of damage from the tornado that first took her to Oz. On the up side, there's no swearing (though words like "knucklehead" and "fool" are used), sex, drinking, or other iffy stuff.

In 3D, some of the battle scenes (even if they're between flying monkeys and chocolate soldiers) can be intense, especially for very young children. After one skirmish, a character is injured severely, and younger viewers may be upset. The Lion, the Tin Man, and the Scarecrow are tortured by a villain; his "punishments" include submerging the Tin Man in water and attaching the Scarecrow to a spinning wheel surrounded by fire. Kansas is shown as having been ravaged by the tornado that originally transported Dorothy to Oz.

Words like "fool" and "knucklehead" are used to disparage others.

Power corrupts, and so can hungering for it. Also, you can do anything you want if you set your mind to it. So think positively!

Although there are no product placements in the actual film, Legends of Oz has lots of merchandise/tie-ins available.