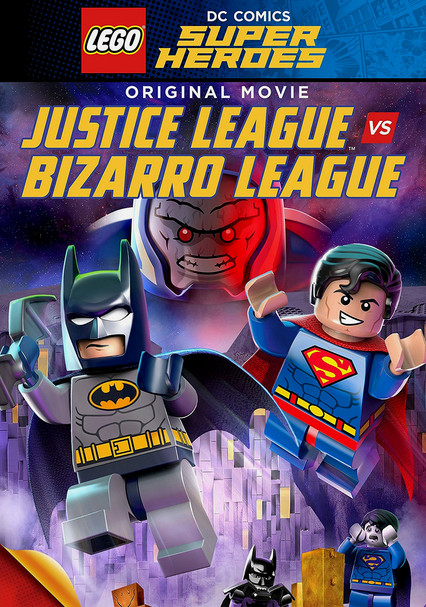 2015 NR 0h 49m DVD
Justice League vs Bizarro League - Batman has joined the just formed Justice League in order to keep tabs on Superman, a mistrust that is complicated by Superman's bad (but well meaning) clone Bizarro and his creation of the Bizarro League, but an even bigger threat forces the two Leagues to join forces.

Parents need to know that Lego: DC Comics Super Heroes: Justice League vs. Bizarro League is a 2015 computer-animated film in which familiar superheroes such as Superman and Wonder Woman team up with their "bizarre" opposites to prevent the bad guys from wreaking havoc. Perhaps unsurprisingly, this amounts to not much more than a 49-minute commercial for Lego and DC Comics; the DVD packaging even includes a miniature "Bizarro" Batman Lego action figure. There's cartoon, comic book, and superhero violence throughout, and the very silly humor occasionally veers into jokes involving burping or underwear. Overall, this short feature could be enjoyable for kids and parents who enjoy Lego toys and DC Comics, but it's a different story for families wary of excessive consumerism in kids' entertainment.

This short animated feature is little more than a commercial for Lego toys and DC Comics. The DVD also comes with a miniature Batman Lego action figure.