Legong: Dance of the Virgins 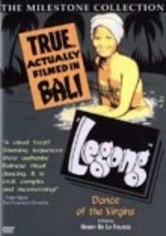 Legong: Dance of the Virgins

1935 NR 0h 56m DVD
Directed by Henri de la Falaise, this 1935 silent drama follows an ill-fated romance between a young Balinese woman (Poetoe Aloes Goesti) and her boyfriend (Njong Njong Njoman), set against the backdrop of an exquisite island paradise. With its footage of dancing, cockfights, parades, religious ceremonies and other rituals, the film paints a vivid portrait of village life in Bali in the early 20th century.