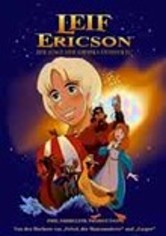 2000 NR 1h 25m DVD
Known as the first European to set foot on North American soil, the nimble young Viking Leif Ericson and his family landed almost 500 years before Columbus. Join the Norse boy in this incredible animated tale and follow his treacherous quest from Iceland to Greenland to the newly discovered Vinland. Along the way, Leif encounters amazing adventures with his father, Eric the Red.